The Annaprsana (The First Feeding Ceremony)
The important stage in the life of the child is first feeding. It was fed on the mother’s milk. But after six or seven months child body will develop and require and greater 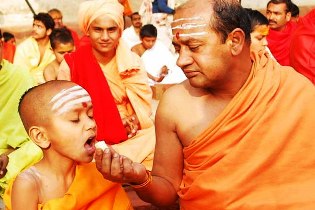 amount of and different types of foods.

While the quantity of the mother’s milk diminished. So for the benefit of the child and the both it was thought necessary that the child should be weaned away from the mother and some substitute for her milk should be given to the child. Thus this Samskara was connected with the satisfaction of the physical need of the child.
.
The Time of Performance
According to the Sŭtras the ceremony was performed in the six month after the birth of the child. Teeth were visible signs that the child was able to take solid food. Giving food before sixth month is strictly prohibited. For weak children further extension of time was allowed. The feeding ceremony should be performed in the sixth month after the birth or eighth, ninth and tenth month. The last limit is one year. Because further postponement would have told on the physical well being of the mother and the digestive capacity of the child. The even months based on boys and add ones for girls were prescribed. This difference based on sex was sentimental that even in ceremonies some sort of discrimination should be made about different sexes.
.
The Ritual and significance
The significance of the Ańaprašana Samskara was this that children were weaned away from their mothers at proper time at proper time. They were not left at the caprice of their parents who often injure their digestive capacity. The feeding ceremony also warned the mother that at a certain time she should stop suckling the child. The ignorant mother out of love for her child goes on suckling it up to year or more. But she little realizes that thereby she allows her own energy to be sapped away without doing real good to the child. A timely caution was given by the ceremony for the benefit of both the child and mother.
.
there is no need to waits until good time if you want to do in exact time which is sixth month sixth day for boy and seventh month seventh day for girl. In case you have crossed the exact time definitely you have to wait until good time

Get update notification direct to your email and learn more about Hinduism.
All rights reserved by Hindu Education Society. Proudly Designed by AO Developers.